Guilt… a useful feeling, or a useless feeling? 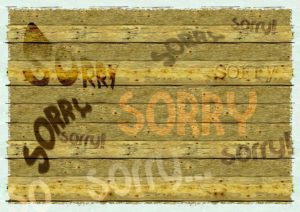 Hold your horses! I am not saying we should all turn into sociopaths or psychopaths, no, not at all!! All I am saying is we should go beyond the feeling of guilt, we should let guilt, together with empathy, become a powerful force to change.

Guilt is, according to dr. Wayne W. Dyer* “a present moment immobilization about a past event”. We now, in the present moment, feel bad about something in the past. It’s okay to feel ‘guilt’ in order to realize that we did or said, something hurtful, something wrong, or that we may have avoided doing or saying something. It’s normal we feel ‘guilty’ about it but that should only be a moment of realizing, of learning. It should mostly be an invitation to act! As long as we keep saying ‘I am sorry’, and don’t get me wrong, I believe it is essential to apologize and to ask for forgiveness, we keep being stuck in the past, we keep reliving, re-apologizing, and our focus is still on the past event.

The only good thing about guilt is that it can be your motivation to change the way you act. As Brené Brown** says: “It’s a psychologically uncomfortable feeling but one that’s helpful”. Use this feeling as a kickstart to act, to take your responsibility and start doing something about it.

As long as you are just ‘knowing’ you did something wrong, you are feeling bad, worthless, inferior and that does not help anyone! Look at the prison system: people are found guilty, locked up and released when society thinks they have been punished long enough…  How does that help anyone? Not only do a lot of prisoners, relapse into criminal behavior after a prison sentence***, I also do not believe anyone comes out feeling a better person either. This study*** shows that people who had to do community service as their punishment, showed less recidivism than people having been in prison as their punishment. They do say it’s a very complicated study, as lots of factors are influencing recidivism but it did show that community service resulted in less recidivism than imprisonment. People had to actually do something, people were still part of society, were still considered useful. Of course, here we are talking about crime. But it does confirm my point that when you only feel (or have been made to feel) guilt, it does not help nor change anyone. When you act, when you actually do something, it makes you feel less worthless, it makes you feel people believe you can still do something good too.

When you’ve done, said something for which you feel guilty: stop the guilt trip and start doing. After having apologized, ask for forgiveness. Even when the person is not ready to forgive you yet, ask it anyway and start making amends. Start acting differently so that what happened, will not happen again. Let empathy and guilt work together so that it becomes a powerful tool for change**. Sometimes you can’t ask for forgiveness anymore, or you can’t act differently towards a certain person as they may not be around anymore but even then, YOU can make the change you need to make. You can start by forgiving yourself, and feel worthy of forgiveness as you do regret what happened. Then you can become the person you need to become, for yourself and also for the people around you.

That is the only constructive result of ‘guilt’: making you change your behavior in the present moment. The past is the past. Guilt is about something in the past. If you do not want to be immobilized by it, start learning from your mistakes and make things better now and for the future. Staying in the ‘guilt’ phase not only immobilizes you but as dr. Wayne Dyer states*, it also intensifies the chances of repeating the unwanted behavior!

As guilt, by the definition by dr. Wayne Dyer*, is a learned behavior because of how our parents, teachers, the church, other institutions, … made you feel when you did something ‘not according’ to their wishes, you can learn to deal with it, you can ‘un-learn’ your automatic response of feeling guilty. You can learn to see it for what it is: other people trying to make you act according to their wishes. That is a type of guilt you need to rid yourself of as it has nothing to do with ethics, with kindness, with moral integrity. That kind of guilt is described as humiliation by Brené Brown in her Atlas of the Heart**. And it is a very, very dangerous feeling as it ultimately leads to violence, she calls it “perhaps the most toxic social dynamic of our age”. Brené Brown actually describes different types of feelings** that are used interchangeably but that are, according to her research, very different experiences. She describes, amongst lots and lots of other feelings, shame, guilt, humiliation and embarrassment.

Shame: The focus is on self, not on behavior. Self-talk is: “I am so stupid”. Shame is not a driver of positive change. We feel we deserve our sense of unworthiness.

Guilt: The focus is on behavior. Self-talk is: “this behavior was stupid”. It can drive positive change and behavior.

Humiliation: We’ve been put down by someone and we feel it’s unfair, we did not deserve this.

Embarrassment: we did something that made us uncomfortable but we know everyone does this kind of things and it’s a fleeting sensation. Sometimes even funny.

Once you’ve decided that you no longer want to live in that world of, what we commonly describe, as the feeling of ‘guilt’, but that you want to be a person who lives according to their own values, responsible for their own actions, there is some hard work that needs to get done. As you are not hiding behind ‘guilt’ any longer and therefor no longer live in the past, you will need to start taking your life into your own hands as you’ve decided to live in the now.

Now YOU are going to make changes so that guilt can be replaced by feeling worthy again.  That’s when you stop:

hoping ‘to be forgiven when people decided you have felt guilty long enough’.

hoping to get pity of other people so that you do not need to take action towards changing your behavior.

letting other people decide what you need to do in order to be worthy -according to their values- again.

letting other people’s approval dictate how you feel.

You choose to take control of your feelings, of your actions.

My invitation to you all this week is:

Take a close look at all the things you feel guilty about, take your time, write them down and feel what are the real consequences of your behavior. You’ll start seeing clearly where

you did something that was not according to your values, or

when it was just a tool others used to manipulate you into a behavior they prefer.

You can’t use guilt as a free pass to do something wrong nor can other people use it as a way of forcing you into a certain behavior.

The line can be thin but it’s so worth taking a closer look at it, as guilt in itself is a useless feeling. You have to act upon it:

or you ignore the manipulative strategies of people around you, with which they are trying to make you behave the way they want you to and has nothing to do with your values.

Good luck with exploring your inner self and discovering your true feelings and motivations for your actions.

Thank you all for reading me and also for supporting me on Medium! If you want unlimited access to all of my articles and many other authors, you can become a Medium Member by clicking on this link https://lifecoachwomen.com/membership and you’ll be supporting me directly (and all the other authors indirectly). Many, many thanks to you all!!!